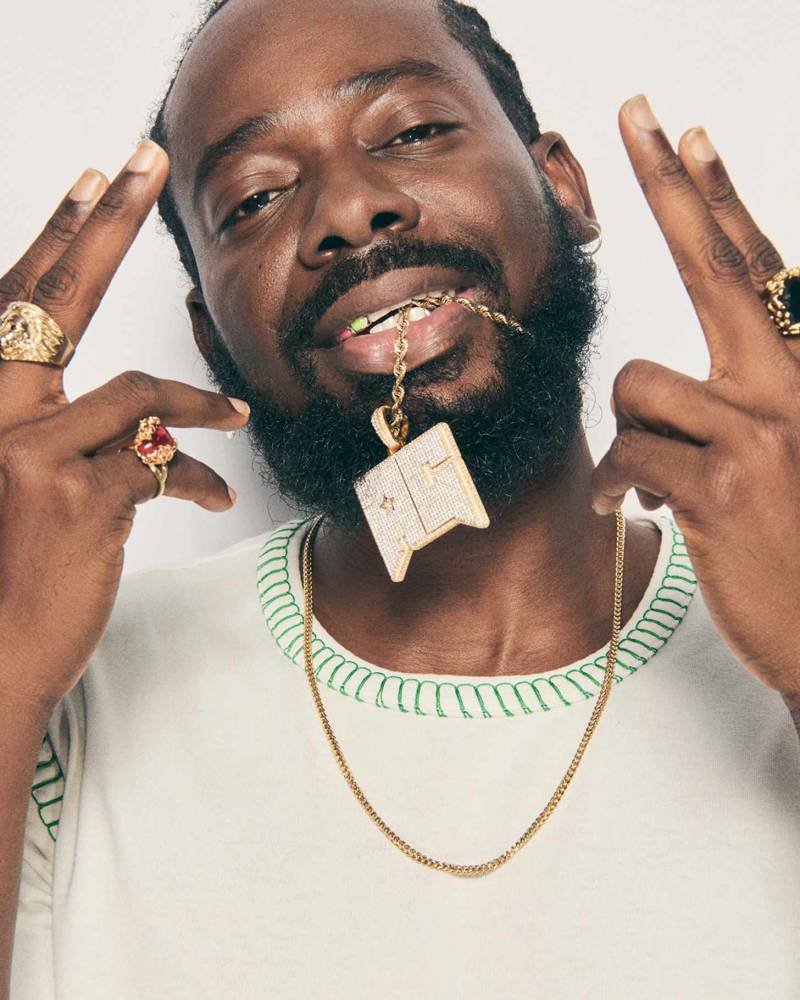 ‘Catch Me if You Can is my best work yet,’ says Gold. ‘I’m grateful for every moment that has led to each song on this album. The only way I can describe it is that this album is 14 tracks of awesomeness – they’re conversations about my life. It’d be impossible for me to choose my favourite because they all have their place. It’s my fourth studio album and the fourth level of my adventure game, which is how I view my musical career. Level one was my debut album Gold in 2016, level two was About 30, 2018, and level three was Afropop Volume 1.’ ‘It gets really interesting at every level; there are new characters, villains, and challenges to deal with. And that’s how my projects are. Catch Me If You Can is really about how I’m not done, how I’ve only just started and a sort of challenge to those who think they’ve seen the best of me – quite literally, catch me if you can.’

The musical journey Gold discovered his musical talent at a young age. ‘I grew up in a Muslim family, but my dad was a liberal man and allowed us to go to church. I joined the choir very early, and that’s where I first picked up my interest in singing. Growing up, our home was always filled with music. My dad used to play a lot of King Sunny Adé and Ebenezer Obey, so I listened to those artists. I listened to a lot of highlife and juju music, some apala and fuji, beautiful sounds from Nigeria, but I was also listening to Backstreet Boys, Westlife, Boyz II Men and Usher. When I was older, the first album I bought with my money was Overexposed by Maroon 5. I didn’t have one style of music that I liked the most, I enjoyed exploring music in general, and all these people have informed my writing today.’

He names Bruno Mars and Post Malone as two of his current favourite artists. Gold has been on an upward trajectory since he first burst onto the music scene with his 2014 track release ‘Sade’, a cover of One Direction’s ‘Story Of My Life’, which enjoyed massive airplay from radio stations in Nigeria. After the release of ‘Sade’, Gold released his first official single titled ‘Orente’ through YBNL Nation, after signing a two-year music contract with the record label in 2015.

However, the road to success wasn’t easy. ‘It was harder than tough, and I had to overcome a lot,’ says Gold. ‘When I was in the choir as a teen, nobody really believed in me as a bonafide singer. And when I was older, I encountered many closed doors when looking for opportunities. During that time, I also tried my hand at reality music talent search shows. I auditioned for MTN Project Fame twice but didn’t qualify and was told I wasn’t good enough.’ He says that while he experienced a lot of disappointment and could’ve easily given up, he decided to double down on his goal. ‘It was time to focus on my reality, so I started working on my writing more. I found a sound for myself. I did a lot of covers. I worked as a graphic designer and made music on the side until I discovered Olamide, one of the best Nigerian rappers.

He’d just launched his label YBNL Nation and had signed two artists. I designed the logo for his label. He didn’t know I was singing. I released my cover ‘Sade’, and he listened to it, liked it, and that’s what got me signed. ‘The struggle and hustle to get to here were really long and tough. The only right thing to do for me is win. I’ve had to prove to people that I’m capable of doing something great. It’s really crazy that many people didn’t get it then, some of whom still don’t get it now, despite what it may look like in terms of social media views. My only response to any adversity is to focus on the win, even if it’s not instant. I focus on whatever it takes to be the best version of myself. I make sure everything I do creatively surpasses the last thing I did. I read somewhere that you’re only as good as your last promise, so that always guides me.’

The fact that I can create a song in the corner of my room, the studio or wherever inspiration strikes, release it and have millions of people listen to and sing it back to me is mind-blowing. I’ll never be able to understand it. It’s also what I love most about being a musician – reaching people, having an impact, and allowing them to share my passion through my songs.’ When it comes to his creative process, he says he doesn’t follow a specific game plan. ‘I don’t have a set process. I make songs that are true to my current energy. I make sure that whatever I’m feeling in the moment – whatever my heart and mind are saying – is all that I do. This is the real truth of my art,’ says Gold. ‘If I’m feeling that I want to rap tomorrow, then I’ll do it. There’s no method to it. It’s not like I’m trying to find the perfect balance. The one thing that I cannot change no matter how hard I try is my voice; it’s the one thing that’s going to be constant in my entire existence and career. I’m going to speak my truth. I don’t promise anything except that what I produce is going to be good. Just know that whatever I put out, I’m super-confident about it. And if you don’t like it, that’s okay. I like it.’ One thing he does keep in mind when making music is its long-term impact. ‘I don’t create for the sake of creating.

I want all of my songs to outlive me, not in the sense that they’ll simply still be available after I’m gone, but they’ll still invoke emotion and affect people. I never want to create something that’s just disposable. I want my music to be something you listen to for life, that new generations listen to. That’s how I think. It’s a longevity game for me.’ He explains he’s not one to produce within specific time frames and has never liked the idea of being pressured to make creative work. ‘For some people, having a time limit or a deadline works, but I’ll never put out any song that I’m not 100% happy with just because of a time frame. For example, it took me seven months to finish the track ‘High’ (ft Davido).

Sometimes, if I’m looking for a word or feel I need to add something to a melody, I’ll leave a session and come back to it. I take my time to put out something because once I put it out, I can’t take it back. I need to be able to say yes, that’s my work, and it’s good. All that matters is that I like it first. I don’t rush my sessions. On some days, I’ll write three songs in one session, but, on the other hand, if all I have after 12 hours is one line, then that’s okay too. ‘It’s always madness putting a project together. I started making Catch Me If You Can in 2020and had no idea what I’d call it then. But I knew I wanted it to mirror my feelings at that moment. I wrote so many songs, and it was tough picking the final 14. It was supposed to be out last September, but I wasn’t really satisfied, and felt I could do more, so we pushed back the date. I don’t really have places where I feel most inspired, but I prefer writing songs outside the studio, in the corner of my room and my own space.’

For example, it took me seven months to finish the track ‘High’ (ft Davido).

Fame and the critics :When it comes to the downside of fame, he states that one thing he can say with absolute certainty is that the power of being unknown is underrated. ‘Once you’re in the public eye, your life isn’t your own anymore. People want to intentionally misunderstand or misconstrue what you say. Before I became well known, that wasn’t happening. You want fame but forget there’s no privacy, and I struggle with that. But, hey, I’m doing well every day, and as time passes, you grow older, and you realise all these things don’t even matter. I don’t get sucked in, so it’s okay. ‘Nowadays, I don’t talk much on social media because it’s just boring when you say something, but people change it to suit some other narrative.

That’s not to say that if I have something to say, I won’t; I just don’t have the energy anymore to put myself out there for people who want to intentionally put me in the wrong. I put all that energy into my music. Music gives me an outlet to say anything, and I really enjoy the freedom of it. I also don’t put energy into what others are doing on social media. My time goes into my work, and I only compare myself to myself. Music is my outlet to say anything and I really enjoy it.’ Gold has experimented with different sounds on each album, which he’s immensely proud of. But it hasn’t always received a favourable response from audiences. ‘The thing that amazes me most is how people are so reluctant to allow an artist to get into a new thing.