Serena Williams Wins Alongside Ons Jabeur In Comeback At Eastbourne 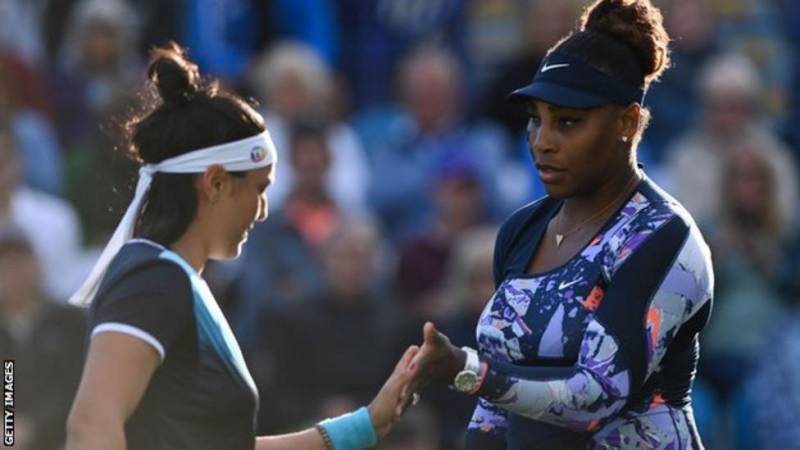 American great Serena Williams says it would be "dishonest" to say she did not have doubts over whether she would play top-level tennis again.

In her comeback after a year out, Williams earned a win alongside Ons Jabeur in the Eastbourne doubles.

Williams, 40, had not played since retiring injured from her first-round match at Wimbledon last year.

"Absolutely, for sure," the 23-time Grand Slam singles champion said when asked if she had feared for her career.

The pair fought back from a slow start and took their third match point in front of an excited Eastbourne crowd.

Asked whether she had experienced any moments of doubt in the past year, Williams said: "I would be dishonest if I said it wasn't. But now my body feels great.

"It's doubles, I'm only playing half of the court. But I've been doing a lot of training and so it definitely feels good."

Williams is set to play in the singles at Wimbledon next week after receiving a wildcard for the Grand Slam event.

This appearance at Eastbourne was designed to build up her match sharpness for the All England Club, where Williams has won seven of her 23 Grand Slam singles titles.

The outing in the East Sussex seaside town appeared to be ending rather more quickly than she would have hoped as Sorribes Tormo and Bouzkova dominated the opening set.

While Sorribes Tormo and Bouzkova have not been regular doubles partners, they have played together before and won a title in Istanbul in April.

An assured start by them looked ominous for Williams and Jabeur, but the star attractions fought back superbly in a more competitive second set.

That took the encounter to a match tie-break and, with light fading on a cool summer evening, Williams and Jabeur clinched victory when Sorribes Tormo put a backhand net volley wide.

Williams yelled in delight before high-fiving Jabeur and sharing a warm hug with her playing partner.

What shape did Williams look in?

Competing again on the WTA Tour after such a long time was always going to be difficult for a player who turns 41 in September.

But it always appeared unlikely Williams, who has also won 16 Grand Slam doubles titles, would even want to play if she did not think she could compete.

She looked rusty with some of her shots in the opening stages and often lacked sharpness at the net, while her movement was also not quite at the required level.

However, all facets of her game improved as the match progressed.

A perfectly executed lob brought up three break points for a 5-3 lead in the second set and, serving to level the match, Williams earned set point when she scampered across the baseline and drilled in a backhand crosscourt winner.

A 102mph ace down the middle levelled the match and took it into the deciding match tie-break.

"I caught some fire in the end. I needed that," she said.

Williams' ball-striking was cleaner and crisper, illustrated in the match tie-break by two deep forehand returns that rocked Sorribes Tormo and put her team into a 7-6 lead.

Her movement continued to be sharp in the closing stages and she reached a drop shot on a match point to Sorribes Tormo and Bouzkova which was then lobbed long.

That enabled Jabeur to bring up their third match point with a deft touch, which was sealed by Sorribes Tormo's mistake and sparked warm celebrations between Williams and Jabeur.

Jabeur, who is ranked third in the WTA singles, said she wanted to win the title in Eastbourne and Williams' competitive spirit has clearly not diminished.

Winning points were greeted by defiant clenched fists and missed opportunities with exasperated looks to the sky.

But there were lighter moments too, with the American managing to laugh when she froze in time and could not return a smash.

"It was great out there and so fun to play with Ons - we had a lot of fun. Our opponents played amazing and we were happy to stay in there," Williams said.