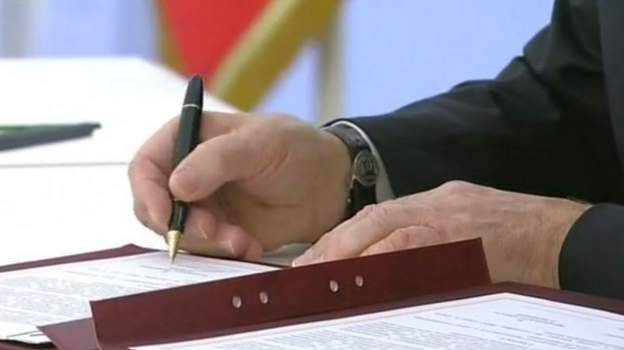 The Russian president has finished his speech and the Russian-appointed leaders of the territories being seized are now signing the formal documents. President Putin is signing them too but sitting at a table several meters away, with aides carrying the documents back and forth. The audience is applauding as each representative is introduced.

Putin claims Russia is not the source of Europe's energy problems

The invasion of Ukraine has impacted energy prices - exacerbating high inflation in many countries. UK PM Liz Truss is among the leaders who have pointed to this. Putin turns this on its head. He says Russia is not the source of the problem and claims the energy crisis has been created by "many years of wrong policies" - that took place way before the war with Ukraine. The Russian leader also criticized capitalism, saying this was not the way to provide for people.

The ceremony has now concluded - at the end President Putin and the Russian-backed leaders of the regions being seized stood for the crowd. The audience in the grand hall chanted "Russia! Russia! Russia!".

The scene resembles the events of eight years ago when Putin was standing with the Moscow-installed leaders of Crimea - a southern Ukrainian peninsula annexed by Russia.

We'll bring you an analysis and reaction to this illegal move by Russia to declare Ukrainian territory as Russia's own, seven months after it invaded the country.

The annexation documents have been signed and Putin has delivered his speech. We're now waiting to see how the world reacts.

Here's what happens next in Russia:

EU leaders: 'We will never recognize this illegal annexation'

The European Council, which brings together EU leaders, has said "we firmly reject and unequivocally condemn" Russia's annexation of Ukrainian territories, which it said had no legal impact.

In the last hour, Putin has hosted a signing ceremony and made a speech celebrating the seizing of four regions in Ukraine - including Russian-held parts Luhansk, Donetsk, Zaporizhzhia, and Kherson.

"We will never recognize this illegal annexation."

It added that it "stands resolutely" with Ukraine and will "strengthen its restrictive measures" on Russia.

President of the EU Commission Ursula von der Leyen said the move would not change anything and all territories "illegally occupied by Russian invaders are Ukrainian land".