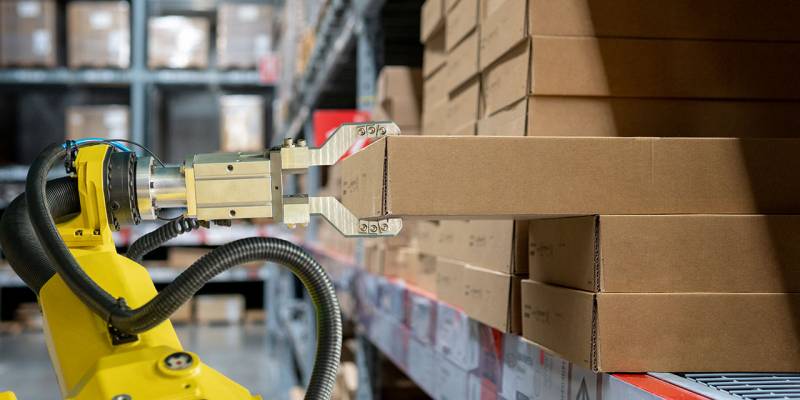 Machines that understand what their human teammates are doing could boost productivity without taking jobs.

RODNEY BROOKS KNOWS a fair bit about robots. Besides being a pioneer of academic robotics research, he has founded companies that have given the world the robot vacuum cleaner, the bomb disposal bot, and a factory robot anyone can program.

Now Brooks wants to introduce another revolutionary type of robot helper—a mobile warehouse robot with the ability to read human body language to tell what workers around it are doing. Robots are increasingly working in close proximity to humans, and finding ways to maximize human-machine teamwork could help companies boost productivity and perhaps lead to new kinds of jobs rather than robots replacing people. But giving robots the ability to read human cues is far from easy.

Brooks’ new company, Robust AI, unveiled its mobile robot, Carter, designed to work in warehouse facilities, last week. “The analogy here is a service dog,” Brooks says via video call. “It obeys you; you can modify its behavior, and it’s there to help you.”

Robust AI’s robot, Carter, looks like the kind of dolly you’d find at a home improvement store, but it has a motorized base, a touchscreen mounted above its handlebar, and a periscope with several cameras. It uses these cameras to scan the surrounding scene, allowing its software to identify workers nearby, and it attempts to infer what they are doing from their pose and how they are moving. If a human worker needs to move several boxes, for example, they can approach a Carter robot moving autonomously and, by grabbing the handlebar, take manual control. The robot can be configured to perform a variety of different tasks using a “no code” graphical interface—for example, to follow a person around a warehouse, carrying items that are picked from shelves.

Brooks has a track record of being early to explore new directions in robotics that sweep through the field, and he has been an outspoken critic of the recent hype over progress in artificial intelligence. But his career also illustrates the challenges that come with commercializing advanced robotics research.

In the 1990s, Brooks helped make robots more practical by showing the benefits of an approach that created complex and practical behaviors by programing robots with relatively simple rules about how to respond to their environment. His lab also carried out pioneering work on human-robot interactions. He went on to cofound iRobot, a company that developed floor cleaning robots, including the Roomba, as well as machines used by the military for tasks like bomb disposal. In 2008 he started Rethink Robotics, a company that built two workplace robots, called Baxter and Sawyer, that were designed to be more user-friendly than existing bots. But the company folded in 2018 citing a lack of sales.

Reading and responding to human body language could be a leap for robot-kind if Brooks’ new company can convince other companies to buy its machines. Large industrial robots still typically work inside of cages to prevent them from hurting anybody. Although factories and warehouses increasingly use wheeled robots to ferry items around, and low-power robotic arms designed to work safely alongside people, human and robot worker still remain largely separate.

Sales of workplace robots worldwide are growing steadily after a recent slowdown in growth due to the pandemic, according to data from the International Federation of Robotics, an industry group. Sales of “collaborative robots,” meaning robots that work in the same physical space as humans without necessarily assisting them directly, grew 6 percent worldwide in 2020, compared with 0.5 percent for all industrial robots over the same period.

Last week Amazon unveiled a new mobile robot, called Proteus, that has its own rudimentary ability to sense humans. While other robots in Amazon facilities work in separate physical spaces from humans—for example, to move shelves stacked with goods to within reach of human workers—Proteus can navigate through areas in which people are working. It uses sensors to look out for humans or other obstacles, and stops if it detects that it might bump into someone. Amazon’s announcement “indicates they are making investments toward greater and greater collaboration,” says Brad Porter, who previously worked as a vice president of robotics at Amazon and who is now the founder and CEO of Collaborative Robots, another startup working on robots designed to work more closely with humans.

Robust AI hopes to go further than Amazon by developing robots that can see what human workers are up to, and help them out. Brooks says this should make human labor less repetitive, and could help workers take on new responsibilities. “We're not trying to replace people here,” he says. “We want to make robots work for people rather than the other way around.”

Clara Vu, a cofounder and the CTO of Veo Robotics, a company that has developed software that makes even large, powerful robots safe to work around, says the opportunities for human-robot teamwork are growing because the technology needed to sense, map, and move through human workplaces is becoming more commonplace. “We’re finding more robots and people working together,” she says. “People are starting to look at human and robot capabilities as really very complementary.”

Robust AI is targeting its technology at smaller warehouses that don’t currently use much automation. Matt Beane, an assistant professor at UC Santa Barbara who studies how organizations use AI and robotics, and who has consulted for Robust AI, says many companies are unable to completely redesign their operations around conventional automation that doesn’t mix well with people. Companies in that position might be more likely to invest in something like Carter, he says, but it can be tricky to measure the return an operation gets on this kind of human-robot teamwork.