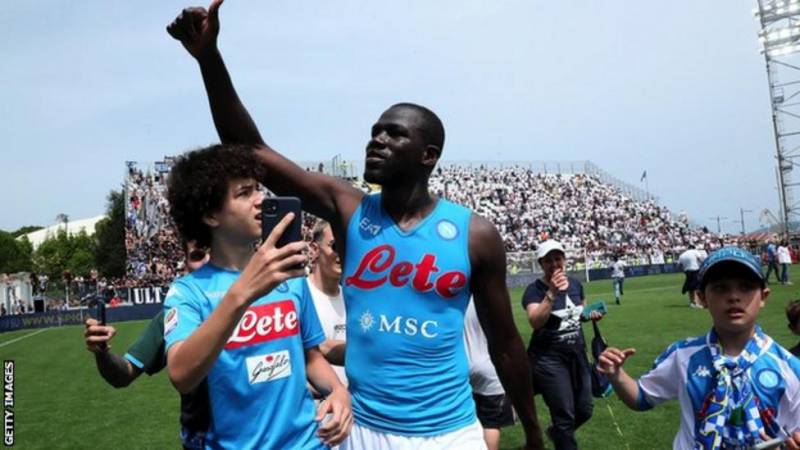 Napoli defender Kalidou Koulibaly says he has a "special bond" with fans of the Serie A side.

The Senegal captain, 31, has made 317 appearances for the club over the course of eight years in Italy.

"There is a lot of love," the centre-back told BBC Sport Africa.

"They appreciate me, I appreciate them back and they know that I'm doing my best on the pitch for them.

"When you play a game and they all scream your name, it's great. We can say I grew up here and my kids were born here so I've got a very special bond with people. of Naples."

Koulibaly says his support from the Partenopei fans extends to backing for his national side.

The defender helped Senegal lift the Africa Cup of Nations title for the first time in February, but missed five league games for his club in the process.

"When I went to Afcon I took a little part of Napoli with me because they are Senegal's first supporters," he said.

"I received a lot of messages from Napoli fans on social media when we won the tournament. I'm really happy about this special relationship.

"When my friends or my brothers arrive in Naples, they are welcomed in such a good way. There is something special between them and I."

However, with his contract running out at the end of next season, Koulibaly has been linked with a move away from the Stadio Diego Armando Maradona.

Despite speculation about his own future, he has been reflecting on a bittersweet last campaign.

Napoli secured a spot in the Champions League, ending a two-year absence from the competition, courtesy of a third-placed Serie A finish in 2021-22 which was seven points behind champions AC Milan.

"I cannot say that I am totally happy, because the title race was something important for us as well but we failed to win the points that we needed to win," Koulibaly said.

"The fans were a little unhappy because they wanted us to fight for the title. Considering the fact that we have great fans, it's a shame and it really hurts.

"We could have done better but we can be happy to be in the Champions League next season."

With captain Lorenzo Insigne leaving for Major League Soccer, Koulibaly admits there will be "a few changes" over the close season but believes they can challenge for silverware again.

"We are also going to lose a few players - some of them are going to leave, some contracts come to an end," the Senegalese added.

"So we'll see what's going to happen but knowing that we'll be in the Champions League will help us to get prepared properly for it.

"There are going to be a few changes next season. I know that Napoli will do everything to be fighting again in the title race."