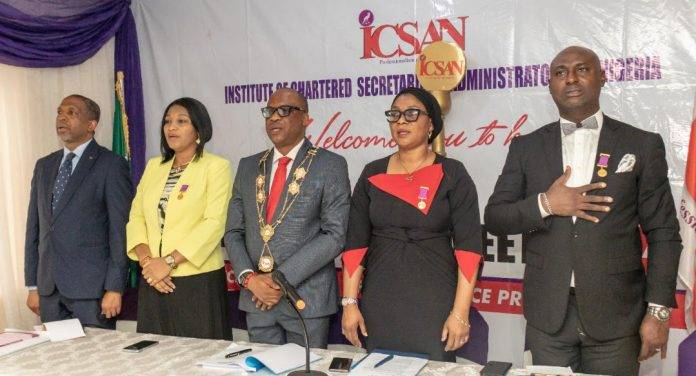 Ahead of the 2023 general elections, the Institute of Chartered Secretaries and Administrators of Nigeria (ICSAN) has called on candidates aspiring for political offices to present solid governance manifestoes instead of the usual undocumented rhetoric.

President of ICSAN, Taiwo Owokalade, who made the appeal during the institute’s quarterly presidential briefing, said the candidates should let Nigerians know their plans for the country and how they could move it forward.

He said Nigerians should eschew tribal or religious politicking; rather the narrative should be about the competence and antecedents of potential leaders.

Owokalade, who spoke on the state of the nation, bemoaned the lingering face-off between the Academic Staff Union of Universities (ASUU) and the Federal Government.

Stating that the interest of the students should be taken seriously, he urged ASUU and the Federal Government to go back to the drawing board and locate a way out of the logjam it had found itself.

Among the many crises facing the nation, he said the issue of insecurity, which had become a nationwide issue, needed to end as it was getting messier and out of hand.

To this end, he called for state policing, urging states to use their resources to equip themselves.

While canvassing a holistic process of tackling insecurity, he said Nigeria was mature enough to have state police.

According to him, the Nigeria Police Force cannot geographically manage the large population.

“They don’t have the security and number to manage the population. Nigeria should be bold enough to have their police architecture. Nigeria is preaching federalism but practicing military era of governance. We need a new Nigeria come 2023 that can give us hope, confidence and make us raise our hands in the comity of nations,” he said.

While reviewing his first year in office and plans in the second year, the ICSAN chief said he had raised the profile of the institute higher than he met it.

He said he planned to embark on a membership drive and for the institute to be seen as the foremost governance institute.