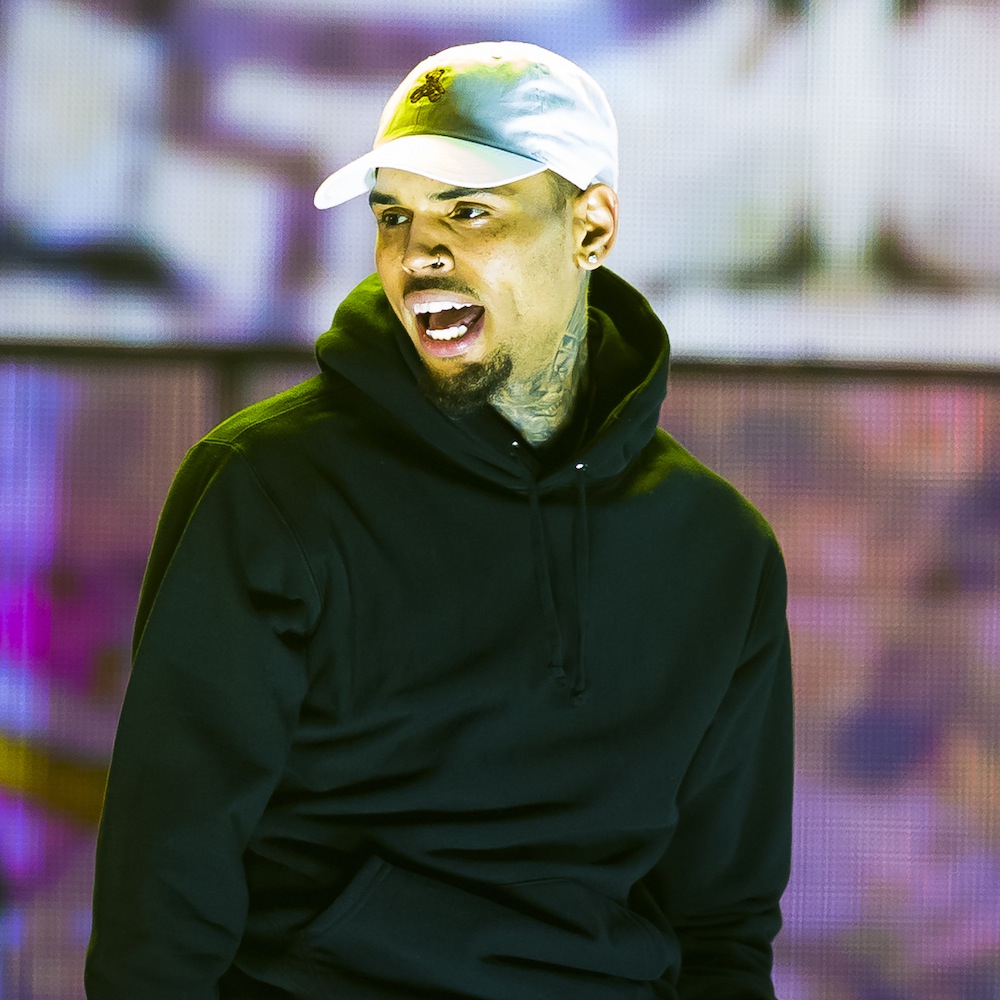 Greeted with comparisons to young  and , Chris Brown arrived in 2005 as a squeaky-clean pop-R&B artist with "Run It!," the first debut single by a male artist to top the Billboard Hot 100 in over a decade. While there was nowhere to go but down, at least in terms of chart positions, the singer, dancer, and occasional rapper was only getting started. Within a few years, Brown became one of the biggest active pop stars with Chris Brown (2005) and Exclusive (2007), multi-platinum albums that produced five more Top Ten singles, including "Kiss Kiss" and "Forever." As a featured artist or duettist, he added to the count with hits such as "No Air," a ballad with . By the end of the decade, Brown underwent a stylistic makeover during which his forebears shifted to the likes of , , and . This, and a more drastic change in public image, did little to slow his commercial momentum. His streak of Top Ten albums was sustained with releases such as Graffiti (2009), the Grammy-winning F.A.M.E. (2011), and Fortune (2012). Browns artistic scope has since continued to widen with Heartbreak on a Full Moon (2017) and Indigo (2019), albums as long as epic films, and Slime & B (2020), a mixtape collaboration with .

Chris Brown is originally from Tappahannock, Virginia. Like a lot of kids born in the mid- to late 80s, he got into his parents favorite music but eventually fell under the spell of hip-hop. Around the time his voice changed, he discovered his singing ability and switched his focus away from MCing. A move to New York led to being discovered by , a  A&R executive who became the singers manager shortly after losing her position in the - merger. The  label, due in part to its track record with younger artists who had established longevity (like  and ), won the bidding war for Brown and lined up several production and songwriting heavy weights, including , , , and , for his self-titled first album. An immediate Top Ten hit when it was released in 2005, Chris Brown not only featured the number one "Run It!" but two other Top Ten singles in "Yo (Excuse Me Miss)" and "Say Goodbye." Brown was subsequently nominated for a Grammy in the category of Best New Artist. Exclusive, released in 2007 and a bit of a departure from the wholesome image presented throughout his debut, was even more successful, featuring the number one single "Kiss Kiss" and two other Top Five hits. Yet another Top Five hit came with "No Air," a duet with  that appeared on own self-titled album. Brown also co-wrote "Disturbia," a number one hit for .

In March 2009, Brown was charged with felonious assault of , an altercation that had prevented his then-partner from taking the stage at the Grammy Awards. Brown was scheduled to perform as well, but he did not appear and maintained a low profile for several months. A fairly substantial backlash resulted in Browns songs being pulled from rotation on several radio stations. Ultimately, however, it had little bearing on the progress of his music career and side acting gigs. The week before the December release of his third album, Graffiti, the single "I Can Transform Ya" was well on its way to reaching the Top 20 of the Hot 100, and his acting roles -- which had already included spots in Stomp the Yard and a recurring role on The O.C. -- hadnt shown any sign of drying up. Graffiti fell considerably short of gold-selling status, but it was nominated for a Grammy Award in the category of Best Contemporary R&B Album, and a  collaboration, "Take My Time," was nominated for Best R&B Performance by a Duo or Group with Vocals.

Weeks after the 2011 Grammy Awards ceremony, Brown released his fourth album, F.A.M.E., which already had four singles on the charts. That album topped the Billboard 200 and the Hot R&B/Hip-Hop charts, and it took the 2012 Grammy for Best R&B Album. During the ceremony, he performed a medley of "Beautiful People" and "Turn Up the Music," the latter of which previewed Fortune, his fifth album, released in May 2012 and an immediate chart-topper in the U.S. A sequence of several singles that began with "Fine China" preceded X, released in September 2014. Less inspired by European dance-pop and more R&B-oriented than his previous release, the album included contributions from , , and , among many others. Four of its singles peaked within the R&B Top Ten. X was only five months old when Brown and , who had previously worked together on one of those hits -- "Loyal," as well as the earlier "Deuces" -- teamed up for Fan of a Fan: The Album. By the end of 2015, Brown released Royalty, his seventh proper album, which was propped up by the Top 20 pop hit "Back to Sleep."

Brown cranked out material in larger volumes and made more featured appearances through the end of the 2010s. Heartbreak on a Full Moon arrived in October 2017 with 45 songs on its deluxe edition. It entered the Billboard 200 at number three, making it the artists eighth consecutive Top Ten album. The following year, Brown appeared on a few high-profile collaborative singles, highlighted by s "Freaky Friday," another Top Ten hit. In June 2019, Brown returned with his ninth solo album, the chart-topping double-length Indigo. A track from the LP, "No Guidance," was nominated for a Grammy for Best R&B Song. The commercial mixtape Slime & B, a collaboration with , followed in May 2020.